Trending
You are at:Home»News»Gaming in learning the key to talent development, says MIT’s David Cavallo

LearnPatch is interviewing some of the speakers at the forthcoming World of Learning Conference and Exhibition. Here, Roisin Woolnough talks to David Cavallo, research scientist and director of the Future of Learning Group at MIT.

How will future talent learn? Well, that’s a question that anyone in training would like to have a definitive answer to. David Cavallo, research scientist and director of the Future of Learning Group, MIT, thinks gaming has already become a very important learning tool and will rapidly become even more important as the younger generation makes its mark in the workplace.

It’s definitely the case that gaming is no longer a niche activity. It has changed from being something that men did in their leisure time to being more mainstream, more gender neutral and relevant to everyday life. It is also gaining increasing acceptance in the workplace as an important and creative learning tool. 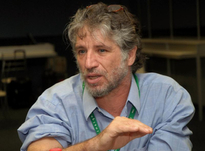 David Cavallo: 'People are finally noticing the really deep learning that has been happening through gaming'

“People are finally noticing the really deep learning that has been happening through gaming,” says Cavallo. “Some training is still stuck in old models of instruction, which have their real value, but ways of using computers for active learning and investigation is very interesting.”

He thinks gaming naturally requires and hones many skills and attitudes that are much needed in the workplace – problem solving, collaboration, teamwork, leadership, social interaction, self direction and so on. “People are taking on really challenging problems in the gaming space. They are not looking for something simple, easy and entertaining – they are involved in quite engaging and challenging things.”

Through large multi-player games, adolescents and young adults in particular are working together, often to accomplish common goals. Cavallo says that although these games can be very complex and have many different layers, the rules of play are quite simple and appealing. They teach good life skills about winning, losing, working collaboratively and trying again to do better next time. “There’s a clear metric in a game. You succeed or you don’t. You progress to the next level or you don’t.”

Although the outcomes may be clear cut, Cavallo says gaming moves learning away from the prescriptive model, such as CBT instruction. “It gives you the ability to test, simulate and imagine models,” he says. “It is the biggest change for most learning cultures. We can now, because of being able to create models, not have to run through models that were pre-generated. There’s the ability to try out new things, explore things, talk about things and collaborate. This is really important for things of high complexity that are less well understood.”

By using gaming and other forms of technology-led learning, Cavallo thinks organisations can create a really strong learning culture, encourage people to try things out, work with colleagues and accept that with learning, comes uncertainty and mistakes. He says it supports the development of individuals and teams, boosting creativity and performance. This can have a positive knock-on effect in many other ways as well – such as increasing an organisation’s ability to attract and retain the best talent. It should also have a strong impact on the bottom line.

Stick to the old models and Cavallo thinks organisations run a very high risk of being left behind, losing their top talent and their competitive edge.

You still see the old corporate way – tell people what you need to tell them and then tell them what you told them. That’s fine for some kinds of problems and audiences, but I think people will be less and less tolerant of this approach. There are other far more powerful learning experiences and you will lose your more creative and talented people if you stick with that model.

Corporate learning teams need to move with this change – it’s not going to go away. On the contrary, it’s going to become more and more prolific.

Gaming’s influence is only going to increase as this younger generation of players moves into the workplace and up the corporate ladder. The way people, in particular young people, want to learn has changed so much, and those changes have to be reflected in workplace learning. There is still a place for some of the more formal, classroom based sessions, but only for a small chunk of learning programmes. Some organisations have already reacted to that change and are making the most of it, but others are still fixated on instructor-led training or think that basic e-learning is enough.

Cavallo thinks the shift away from formal learning, from basing everything around performance and efficiency has already begun as people increasingly realise that innovation and creativity are what give companies their competitive edge. However, there is still a long way to go.

Read our other World of Learning articles: