Trending
You are at:Home»News»Latest»Moving from courses to resources 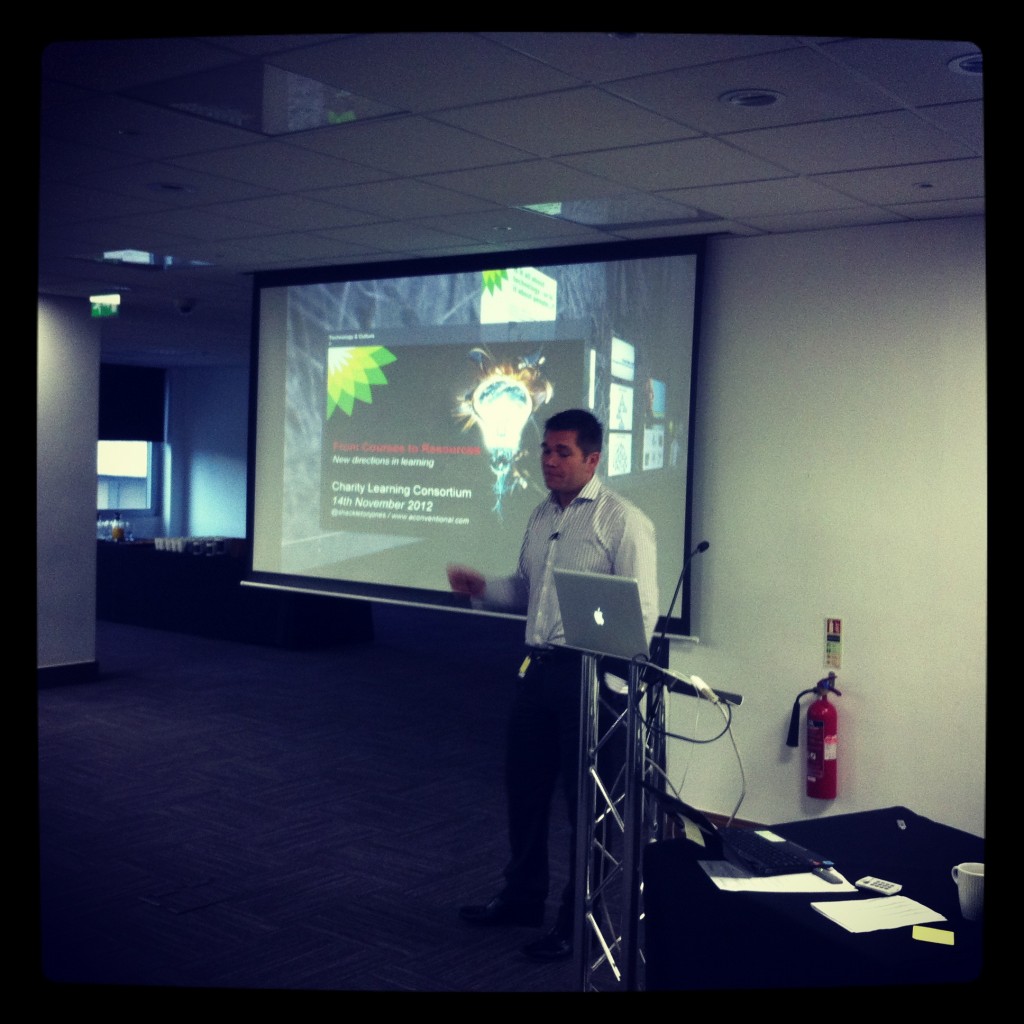 [Warning: live blog, could be typos]

Head of online and informal learning at BP, Nick Shackleton-Jones, described the shift from courses to resources in L&D in his keynote to the 2012 Charity Learning Conference.

Shackleton-Jones said we tend to make a mistake in looking at new developments in – we tend to focus on the technology. We need to figure out how to use it. Lesson from the BBC, where he used to work, is always listen to your audience. It can be surprising what you hear.

At BP, Nick videoed some delegates on a course he attended. Asked how they learned. Answers:

Formal courses are less significant. We need to show some humility on how we approach learning interventions.

Quotes Peter Druker:  ‘Culture eats strategy for breakfast’ to make the point that 85% of how an organisation works is culture, 15% is policy and procedure.

If culture is so important what don’t we focus on it more. Reason: we didn’t know how to. But, Shackleton-Jones says that is changing as we have new technology to help us.

He then showed this video to make the point:

He highlighted the fact that 78% trust peer recommendations, which mirrors the culture stat he mentioned earlier.

There has also been a shift from top-down structures to more fluid many-to-many networks. Agility and being able to reconfigure quickly is now more of an issue for organisations.

Talked through the induction process at BP. It used to involve hours of attending classroom-based sessions.

Turned this into a portal  which included a lot of video showing people and places in the organisation and how the business works, including advice for new starters.

BP used infographics to show step-by-step guides and animations to show how different parts of the business fit together.

Al;so filmed a lot of senior executives – and they were unscripted. The most powerful voice is that of your colleagues – include the voices in your content.

Disaggregation of media is key now, says Shackleton-Jones. Media is being peeled apart so how you deliver content is changing. You can develop content that suits your budget. We will less CBT type stuff.

So question then is how to use these different types of media? Understand the user’s ‘pattern of concern’. For example, new starters are concerned with fitting in and getting over being the ‘new face’. The most popular part of the induction process was the simple checklist of things to do as a new starter.

Impact and evaluation
Of 6,000 new starts BP had 10,000 new visitors. It turned out the new portal for induction was being used by others in the organisation such as those who were moving internally.

BP has a benchmarking survey to see if people onboard faster and will be looking at these results as they emerge. Evidence so far – unique visitors, for example – suggests the portal has been very popular.

Stories are good for sharing ‘visible acts of leadership’

He then showed this video as an example of how video can help people learn a new skill.

So, what if you could replicate this across a business. Would need to spot a good thing in the business and then share it.

Then looked at Moo the internal portal the the BBC that Shackleton-Jones worked on. It didn’t work that well. The learning: build a space for the community and they won’t necessarily come.

Shackleton-Jones then talked through the development of The Hub at BP. He said the main focus has been content generation to create the content that will fill the space to encourage colleagues in.

The Hub has around 900 pieces of content – unscripted video content from people in the business. In Beta, there 70,000 hits in the site – that’s before they told the business about it.

Users can rate content and comment on it. BP will be evaluating the Hub later this year – they know it is being used, which is the main thing says Shackleton-Jones.