Trending
You are at:Home»News»Latest»Secrets of success for game-based learning: Ben Betts on PonyPrep 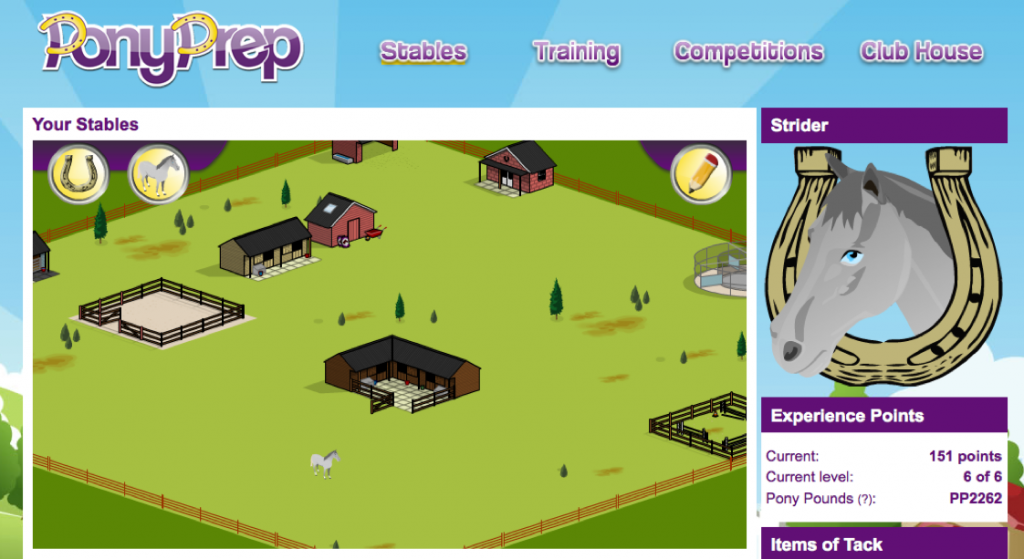 The Pony Club’s site PonyPrep won gold at last week’s E-learning Age Awards for the best e-learning project in the not for profit sector. We talked to Ben Betts, CEO of learning technology company HT2, the company that built the PonyPrep site.

Briefly explain PonyPrep – what it is, who it is for and how it works.

PonyPrep is the place to practise for Pony Club! Targeted towards young pony enthusiasts, the website is a fun way to learn the core aspects of the Pony Club’s curriculum.

The website takes the form of a game. Learners earn experience points by reading, watching and interacting with content – which ranges from text, to YouTube videos, to simple games. Having earned experience points, learners can build out their ‘stables’, buy ‘tack’ and enter into competitions.

Competitions test your knowledge and inspect your stables. Having completed a competition you are awarded a rosette (first, second, third or reserve) and you get your name on our leader boards, which are very competitive.

How did this idea come about – who thought it up and felt it would be a good idea?

The Pony Club were tasked with moving some of their curriculum online back in 2010.  HT2 was one of several companies approached to help with the project and we were selected based on our game-based learning concept.

What was your role in the project?

I led the user experience design and managed the project.

How long did the project take – from idea to launch?

In total we spent about three months working on the project, from specification to launch.

How much did it cost?

Can’t say, but will say the judges couldn’t believe how little it cost. I will say that there has been £0 outside advertising put in to making the site popular – it’s gone viral through the Pony Club’s networks and Social Media.

Is the game modeled on any other games?

Many of the mini-games within the game itself are based on others. For example, we teach learners the ‘rhythms’ of the pony with a ‘Guitar hero’ style mini-game.

How successful has PonyPrep been so far?

Very. There have been more than 2.5 million page views and more than 85,000 registered users. You don’t have to register to access the content, so that last one is a big deal.

Have there been any surprises – eg users liking any one part above another?

The best surprise has been the uptake in schools, where PonyPrep is now used as a part of sports lessons and the Olympic legacy. Nearly all of Team GB’s riders were once Pony Club members, so that’s a great incentive to youngsters.

What is the typical user profile – age/gender/when they access the site?

Most are 11-13 year old girls, accessing the site at evenings and weekends.

Is the game optimised for all platforms and how is it being accessed?

No, it’s optimised for browser delivery on a desktop/laptop. Not so many of our audience own (or did) own smartphones, they are just a little too young.  Having said that, all of the content can be accessed from any connected device.

What have you learned from creating this game – I’m interested here in what other learning pros could learn from the experience of designing and building a game?

Simple works best. Our game is easy to explain and understand and we think that’s at the heart of it’s success. You’ll know when you’ve got a game for learning right because it will be simple and logical.

What next for PonyPrep – any further plans?

We update the site each year. Last year we added in the ability to earn ‘PonyPounds’ by playing simple puzzle games. These pounds can then be redeemed by ‘adopting’ Blue Cross rescue animals in to your stables. All the ponies are real, so we are helping to raise the profile of animals in need of support.

And do you plan to create more games yourself?

Yes, we’ve got three in progress right now. We’re seeing a lot of uptake for ‘game-like’ experiences. By this I mean projects that are inspired by games or that embody game-like behaviours. Not so much interest in building full on immersive 3-D worlds, just yet.