Trending
You are at:Home»News»Latest»The 70:20:10 model is flavour of the month, according to the UK Learning Trends Index

The really hot learning intervention of the moment is the #70:20:10 model. This model works along the theory that 70% of learning comes from on-the-job experiences, 20% from relationships, networks and feedback from people and only 10% from formal training such as courses and it is rapidly gaining traction in the workplace.

This is one of the main findings of the latest #uk learning trends index produced by #good practice. The report, now in its fifth year, asks senior UK L&D professionals about the most important issues and challenges they currently face in the workplace.

The Index found that of the numerous new learning interventions and ideas – such as mobile learning, blended learning, gamification and virtual classrooms – it is 70:20:10 that has really taken off. According to the report:

Combine the last two numbers and that means that 74% of organisations either currently use 70:20:10 or plan to do so in the near future. 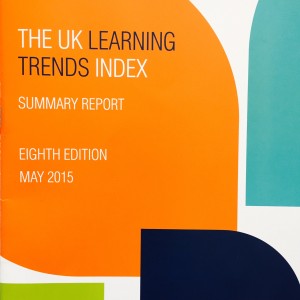 This indicates that 70:20:10 has overtaken mobile learning in popularity, despite the constant talk about mobile learning over the past few years. According to the report, only a third of L&D have taken steps to trial or launch a mobile learning initiative in their organisation. However, L&D is making greater use of other forms of technology, such as e-learning and online performance support tools.

So, 70:20:10 is big news, but is it working? The report suggests that it doesn’t suit all organisations. For example, 32% of respondents said 70:20:10 is somewhat useful but lacks practical focus. A further 15% said it is too rigid a framework to be of use and 8% think it is not of any use at all.

A major criticism leveled at the framework is people are too keen to embrace it as the magic pill that will solve all problems. Some experts say 70:20:10 is too prescriptive a model and that any organisations planning to use it as the basis for their learning strategy should proceed with caution.

However, the very existence of the model is interesting in terms of what it signifies about current attitudes towards learning. It highlights the increasing recognition of the importance of on-the-job learning and the move away from more formal, classroom based learning.

In the report, respondents were asked to state which business tools and development practices they use to support on-the-job learning. What emerged is that the most used development practice is deliberate interaction with senior management – stated by 81%. This was followed by stretching assignments, used by 72%, exposure to other departments and roles, used by 71% and planned participation in a new project or working group, as used by 70%.

Online communities of practice stand out as one way that people are really engaging with learning. An online community of practice is a group of people who share a concern or passion for something they do and interact regularly in order to improve. Examples include:

These groups tend to be social, informal and supportive, resulting in intentional and non-intentional learning. They are very successful examples of informal, self-directed learning.

What is L&D’s role in this? According to the Index, 60% of learning managers are aware of the existence of online communities of practice in their organisation but only 32% say that their L&D function intentionally uses them to support on-the-job learning. L&D has much to gain from supporting such groups and certainly in getting new groups started.

A recent survey by training organisation Profitability L&D Services, called ‘Learning with Impact: How L&D can Deliver Better Business Results’, found that 35% of business leaders want greater use of social and collaborative learning from their L&D function.

Encouraging and facilitating informal learning is definitely on the rise. Roughly 70% of survey respondents said their reliance on informal learning would increase. The report highlighted the Profitability survey, which shows that 69% of L&D practitioners think that on-the-job learning delivers lasting improvement in employee behaviour, knowledge and skills. Despite all this evidence, 76% of UK Learning Trends Index respondents do not have any kind of strategy for informal learning.

The Index mentions the inherent paradox in this – namely, that so many organisations use or plan to use the 70:20:10 model, yet would appear to be doing it without a clearly defined strategy to support and enhance informal learning, despite informal learning being the cornerstone of the framework.

It could be that L&D wants the learning to happen organically and does not to want to over-manage it. Or it could just be that L&D is not being proactive or strategic enough. As learning expert, Nigel Paine says: “Some L&D people go around saying, ‘Oh yes, we’re doing 70:20:10’ without actually getting at changing the learning itself.”

The report certainly found a huge discrepancy between the views of L&D and the rest of the business. Those senior L&D leaders surveyed reported high levels of optimism about their ability to meet the learning needs of the business and its perception of its impact upon corporate performance. The Index calls this optimism bias, which it says is a natural aspect of human behavior to believe that future performance will be much better than previous performance.

However, a survey conducted by the Corporate Leadership Council found that 56% of managers believe that shutting down their organisation’s L&D function would have no discernible impact on performance. That is quite some mismatch.