Trending
You are at:Home»News»Latest»Speaker reflections from the Learning Technologies barcamp on inclusion

Our ninth barcamp event was held on 12 February 2020. As with previous events it was held at the end of day one of the Learning Technologies conference in a bar close to the conference venue.

We call these events barcamps because we aim to carry on the conversations from day one of the conference and exhibition in a local pub. The format is simple, each speaker will have between 10 and 15 minutes to host a conversation based on their areas of expertise. Once the the time is up, speakers will be asked to move to the next table to talk about their topic to the next group. The event comes to an end when all groups have had a conversation with each of the speakers.

This year we tried out some new things. First, artist and consultant Doug Shaw created a space for some creative practice in which attendees were invited to co-create some art. You can see the incredible outcome below. Second, for the first time I asked my network if anyone would like to put themselves forward to speak. For previous events I had approached speakers. In the spirit of the topic, inclusion, I thought an open invitation would be the best way for people to recommend themselves.

It worked very well in one sense – I received offers to speak from a range of people thanks to my request being shared into other networks. However, I was challenged over the diversity of the speaker line-up. This was a good challenge, which made me reflect on how an event can be truly inclusive. Is my network diverse enough? Is my invitation, and the event, inclusive enough? These are really important questions for anyone organising an event and I continue to chew over them and learn from this experience.

Finally, I asked our speakers to share some reflections from the barcamp. I have never done this before which has meant that the conversations have remained with the speakers and attendees once the event has finished. To get a sense of what was being discussed this year, the speakers kindly agreed to share a few lines reflecting on their conversations.

Many thanks to our speakers for sharing these thoughts and for making the event such a success. Our thanks also to 5app for providing the drinks. Here are our speakers’ reflections on the event . . . 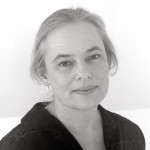 Taking part in Barcamp 2020 was definitely the highlight of Learning Technologies for me. It was a real pleasure to be at an event which felt truly inclusive and was open to everyone. The atmosphere was informal and relaxed which made it easy to take part as a moderator and for people to join in discussions if they wanted to.

My contribution to the theme of inclusion was a focus on digital accessibility. Our conversations explored some of the myths around accessibility in L&D, particularly that it benefits only a very small proportion of our audience and that it makes eLearning boring and non-interactive. We also discussed some of the challenges around implementing accessibility in our industry, such as a lack of engagement and the fact that it is still often considered as an afterthought making it difficult and expensive to put into practice. Another topic which came up was new public sector accessibility legal regulations and the impact on digital accessibility that this will have for L&D moving forward.

One of the most positive takeaways of the evening for me was that there genuinely seemed to be an appetite for change. One table spoke about the importance of accessibility being adopted throughout organisations, and not being seen just as the role of developers and designers. Another spoke of the need for connection and collaboration across the industry to ensure that we can all contribute to making digital learning accessible for everyone in the future. 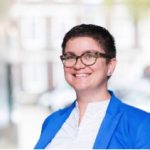 Christine Locher, Learning Consultant with NIIT where she is also in the global diversity and Inclusion committee

In my portion of the session, I decided to make inclusion personal. I don’t normally tend to do this, but I wanted to add visibility to an overlooked topic, and visibility is, in its essence, personal. The topic is nonbinary gender identity – mine. Choosing a mixed approach, personal storytelling, safely fig-leafed with a helpful framework.

The framework is called Tetralemma, and covers five ways of looking at options. A (here, female), B (here, male), both, neither and “something different entirely”. It works beautifully to take gender conversations out of a strictly binary zone, and it also works for anything else that benefits from “de-binarizing”. (More here.)

I spoke about identifying as nonbinary (in the framework: Sometimes both, sometimes neither) and what that meant for me over time. The first accidental gender conversation aged 5 in a Catholic kindergarten in rural Southern Germany (didn’t go well…). Puberty and its discontents. Some of the reactions I got over time. How I nearly lost my career due to gender-based bullying. How difficult things are when people don’t have a concept for who you are, and how temptingly safe it seems to just try and pass.

While I’m not in the closet, I also don’t wave it in people’s faces. Safety still comes first. And for most of the time, with inclusion working, it really doesn’t matter that much. My global project is a project, not a “nonbinary project”, same with my most recent learning or coaching intervention. Yet, as the topic is visibility vs. passing, I decided to come forward. Role models matter deeply in inclusion, seeing someone like you out there. And sometimes we have to be the elders we wish we had when we were younger.

I wrote a longer piece about key factors to enable these conversations. It is here. 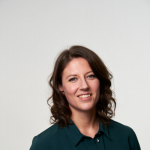 Belonging is at the heart of inclusion; a sense of acceptance, involvement and identity; a community working towards a shared goal. It’s only when people feel they belong to a company that they can share ideas, confidently speak up, and fully contribute.

Although there is no checklist for building a ‘belonging culture’, BarCamp was the perfect opportunity to discuss ways of building a culture where people feel connected and successes are celebrated.

Our discussions were focused on two habits: Gratitude and Shine Theory.

The practice of gratitude is a regular occurrence at Media Zoo. A celebratory event to recognise individuals and strengthen team bonds. During the evening, I was amazed at the level of involvement and how people opened up to share their personal achievements. There were some touching and emotional moments, particularly when people thanked their colleagues in the group.

We then spoke about Shine Theory, a term first used to improve gender equality, to give quieter or less represented individuals a louder voice and their ideas recognised. On each of the tables, there was a lot of “shining” on individuals.

Rather than resenting someone else’s good idea, we can support our friends and colleagues by “shining” on them to amplify their idea and boost their confidence. This confidence is infectious – together we can fuel collective ambition. Success isn’t limited or finite and if we share successes we can all be elevated.

These celebratory events, “Gratitude” and ‘Shining” can strengthen bonds within a team, build a community and create a sense of belonging. I would encourage everyone to think about how they can build these habits into your weekly routines to get to know each other and celebrate the big wins as well as the small.

Thanks to everyone who took part in BarCamp. Looking forward to next year! 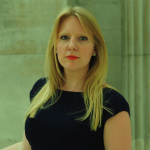 I briefly explained some of the pieces of research I’ve been working on over the last year and let attendees choose what if they wanted to talk about one of them (or something else):

What was amazing is how different things resonated for different tables – one had a great discussion about the importance of men feeling able to take parental leave and work flexibly for equality; another table discussed the relationship between personal impact and emotional intelligence, another how developing emotional intelligence is fundamental to inclusion but how low a priority it often is. Another loved the idea of putting the responsibility for creating inclusion on everyone in the organization so we talked about what that means in terms of individual behaviour! 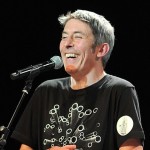 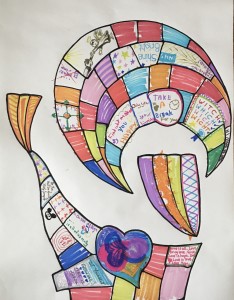 The art was invitational. People were generally willing to participate, and were not coerced in any way. When we’re facilitating learning – how often can we make that an invitational process rather than a coercive one?

Folk noticed that what they conceive in their mind’s eye, doesn’t necessarily materialise on paper. I encouraged people to focus less on a preconceived outcome, but instead to play with the process of applying colour, this can help free us from some limiting beliefs.

I invited people to decorate a piece, or pieces of the mapped out ‘stained glass’ design – some folk took one panel, some took more, and some ignored me completely and adapted panels to suit their design ideas.

People seemed to enjoy the opportunity to make – to try something different.

Doug has posted a longer piece reflecting on barcamp, which you can read here.